1.Could Putin Launch Another Invasion?

The same factors that led up to his incursion into Ukraine are in place again, including domestic protests, a struggling economy and a desire for glory.

The UK and the West in general may be forced to capitulate “without a shot being fired” if they continue “ceding the strategic initiative” to rivals such as China and Russia, a senior British military commander has said.

“While we drained our strength in interventions like Iraq, others used the time and space to further their interests more strategically,” General Sir Patrick Sanders, commander of the UK’s Strategic Command, wrote in The Times of London on Saturday.

A Chinese think tank recently described tensions in U.S.-China relations as the worst since the Tiananmen Square massacre in 1989, and it advised Communist Party leaders to prepare for war with the United States.

Apparently, what many Americans don’t realize is that years of classified Pentagon war games strongly suggest that the U.S. military would lose that war.

Part of the problem is that China advanced its A2/AD strategy while the Pentagon was largely distracted fighting counterterrorism and counterinsurgency wars in Iraq and Afghanistan for two decades.

Beijing is also laser-focused on Taiwan and regional hegemony, while the U.S. military must project power and prepare for potential conflict scenarios all around the globe, giving the Pentagon what Ochmanek calls an “attention deficit disorder.”

Days ahead of Thursday’s high-stakes summit in Alaska between Biden’s national security team and top Chinese officials which will include Secretary of State Antony Blinken and director of the Central Foreign Affairs Commission Yang Jiechi, each side already has conflicting visions in terms of expectations. Washington has recently rejected China’s calling it a “strategic dialogue” while most China watchers say any kind of hoped-for diplomatic breakthrough is very unlikely.

And looming large over the meeting is the Taiwan issue, particularly after the top US commander over the Indo-Pacific region of operation Admiral Phil Davidson gave testimony on the growing China threat before a Senate panel last week wherein he said based on China’s current military expansion he sees a Chinese move on Taiwan “in the next six years.”

His conclusions are more insightful, analytical, intelligent, accurate and convincing than those of many foreign policy analysts. Plenty of people, both the U.S. government officials and average citizens, could learn a lot from this young man, on this very important topic. 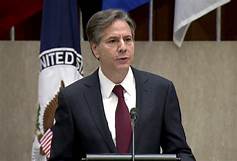 Breaking with his former boss, Barack Obama (who signed legislation to make most of the Bush-era tax cuts permanent), Biden is embarking on what could be the biggest federal tax hike since 1993 (remember ‘no new taxes’?) to finance an infrastructure plan, Biden’s climate-change initiatives, health care and economic inequality.

Defense Secretary Lloyd Austin has declared that the armed forces will “stand down” for 60 days to address alleged “extremism” in the ranks. Given recent statements from lawmaker, the current West Point superintendent, and Navy leadership, it’s clear that Right-leaning servicemembers will face scrutiny while Black Lives Matter and far-left radicals will get a pass. This move to appease the Biden Administration’s radical elements will only damage the legitimacy of America’s most trusted institution and distract from vital issues at home and abroad.

When defense officials talk about “diversity, equity, and inclusion”- the vague social justice mantra […] they divert attention from the injustices that America’s overseas engagements have created.

We have the commander-in-chief, Joe Biden, speak about the “intensity of purpose” that will be devoted to “designing body armor that fits women properly, tailoring combat uniforms for women, creating maternity flight suits, updating requirements for their hairstyles.” This was not a joke-or, rather, it was not said in jest.

Recent reporting by Task & Purpose, a military-news outfit, reveals that Army brass is weighing whether to backtrack on the new gender-neutral Army Combat Fitness Test (ACFT) to instead include different evaluation metrics for men and women after early results indicated that as many as 65 percent of female soldiers were failing the test versus only 10 percent of men.

Boys are four times as likely to commit suicide than girls between the ages of 15 and 19. They’re also significantly more likely to drop out of school, become homeless, and end up I prison, says Dr. Warren Farrell.

Yet, President Biden’s newly established Gender Policy Council focuses only on the problems faced by females and completely ignore the problems face by men and boys, like absent fatherhood – the single biggest predictor of suicide, says Dr. Farrell.

Dr. Farrell has been researching and writing about gender issues since the 1960s. As a longtime feminist and the only man to be elected three times to the Board of Directors of the National Organization for Women in New York City, he has become an unlikely critic of the Gender Policy Council.

It’s a culture dictatorship because the suppression of dissenting speech is an instrument that only the most brutal dictators have used throughout civilization.

[In Communist Hungary]  “My parents and family members lived in fear of people overhearing a conversation that might deviate from accepted thought.”