1.  Ukraine’s President Volodymyr Zelensky says he’s open for talks with Russia’s President Vladimir Putin in Israel, but only if there is a cease-fire in place.

Zelensky said Saturday he told Israel’s Prime Minister Naftali Bennett that he would be ready to meet Putin in Jerusalem. Bennett visited Moscow for a meeting with Putin and spoke repeatedly with Zelensky and the leaders of France and Germany as he sought to help mediate an end to the war.

Zelensky said Bennett informed him about his talks with Putin, adding that he can’t share details.

2.  Stoltenberg Says Ukraine’s NATO Membership Was Never “Imminent” Or “On The Agenda”

Speaking at the Antalya Diplomacy Forum, the NATO chief said that “it has been clear for a long time that membership for Ukraine was not something that was imminent, not something which is relevant in the near future.” he said. 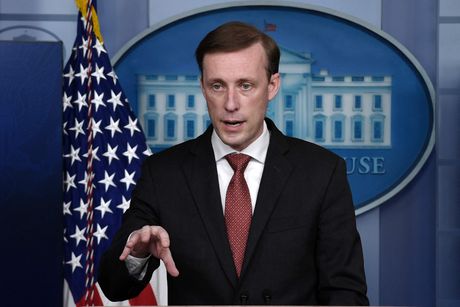 WASHINGTON—U.S. national security adviser Jake Sullivan warned of a full-fledged NATO response if a Russian strike were to hit member-state Poland, after an attack on a Ukrainian military base roughly 10 miles from the border.

“If there is a military attack on NATO territory it would cause the invocation of Article 5, and we would bring the full force of the NATO alliance to bear in responding to it,” Mr. Sullivan said in an interview Sunday on CBS News’ “Face the Nation.”

A petition was officially sent to Ukraine president Volodymyr Zelensky in 2021 that begs the Ukrainian president and former actor to close down U.S. biolabs in Ukraine. The petition calls the biolabs “DEATH FACTORIES.”

The petition, translated, filed by Isaev Mykola Vsisovich in 2021 to the president of Ukraine and supported by others, discusses the U.S. biolabs in numerous countries including Ukraine that are believed to be chemical bioweapons storage facilities for the globalist Joe Biden regime. The petition, translated, states: “In connection with the above, I ASK the President of Ukraine, who, according to Article 102 of the Constitution of Ukraine, is the Guarantor of the observance of the Constitution, rights and freedoms of citizens of Ukraine: 1.IMMEDIATELY CLOSE American bio-laboratories on the territory of Ukraine; 2.ENSURE the investigation of the activities of American bio-laboratories on the territory of Ukraine; 3.ENSURE VERIFICATION of the possible participation of Ukrainian scientists and Ukrainian medical organizations in the creation of coronavirus, as reported in the Petition No. 22/091370-ep on the website of the President of Ukraine.”

This week, the Biden White House hosted dozens of the country’s top Tik Tok influencers on a zoom call, presenting them with “key information” about the ongoing Russia-Ukraine conflict so they can relay the DC Swamp’s propaganda to their millions of followers.

[…] As even the New York Times put it, Biden has recruited “an influencer army.”

[…] According to the Washington Post, the Biden Administration has targeted TikTok as an outlet to disseminate its message because, especially with the current conflict in Ukraine, the platform has served as a “primary outlet for spreading news to the masses abroad.”

6.  Poll: Czechs back Ukrainians but less enthusiastic about inviting them into their homes

In Poland, almost half of the population would welcome Ukrainian refugees into their homes

Poll: Czechs back Ukrainians but less enthusiastic about inviting them into their homes

7.  Amazing: Poles take 800,000 Ukrainian refugees into their homes, which means no new refugee camps are needed

In an interview for CNN, the Polish ambassador to the United States, Marek Magierowski, emphasized the uniqueness of the situation concerning the Ukrainian refugees arriving in Poland.

“This is probably the first such migration crisis in Europe’s history in which the host country does not even need to build migration camps because all those 800,000 refugees have already found or will find safe shelter in Polish homes, in Polish boarding houses, student dormitories,” he said on Saturday night.

Amazing: Poles take 800,000 Ukrainian refugees into their homes, which means no new refugee camps are needed

8.  Why doesn’t NATO impose a no-fly zone over Ukraine?

Even if Western countries have shown an unwavering resolve to condemn Moscow’s military aggression while simultaneously unleashing a set of ruinous sanctions to cripple its military apparatus, a no-fly zone remains the Rubicon that democracies are unwilling to cross.

A relatively novel concept, the no-fly zone – or NFZ – was pioneered in the early 1990s during the Gulf War, when a coalition of 35 nations teamed up to push the Iraqi forces of Saddam Hussein out of Kuwait.

The theory is simple: a no-fly zone is a limited area over which aircraft of specific origin are not allowed to fly. It could be seen as the aerial equivalent of a demilitarised zone.

In practice, though, the concept is both complicated and risky.

Contrary to Iraq, Bosnia, and Libya, a no-fly zone in Ukraine would pit NATO against a nuclear power, Russia, with the second most powerful army in the world – something that leaders obviously want to avoid.

“I believe that all encouragements for NATO to get involved in the military conflict now are irresponsible,” said Lithuanian Prime Minister Ingrida Simonyte.

9.  Why Sanctions Don’t Work, and Why They Mostly Hurt Ordinary People

The United States and its Western European allies have in recent days repeatedly increased economic sanctions against not only the Russian regime, but against millions of ordinary Russians.

It has done this by cutting much of Russian trade and Russian finance out of international markets. Moody’s and S&P Global have both downgraded Russia’s credit rating. The US has frozen Russian reserves and cut many Russian banks off from SWIFT, the international banking communications system. Europe is planning on big cuts to its purchases of natural gas from Russia. The US is mulling a stop on all purchases of Russian crude. The ruble has fallen to a record low against the dollar. Russia is at risk of defaulting on its foreign debts for the first time in more than a century. Many of the sanctions appear targeted at only certain wealthy Russians, but these moves greatly increase perceptions of geopolitical risk for anyone with Russian investments or investments connected to Russia. That means many investors and corporations will “voluntarily” cut back their activities in Russia to reduce risk and because they figure they might be targeted next. Ground-up pressure is mounting also: corporations like Coca-Cola and McDonald’s are being pressured to close their operations—and thus lay off all their workers—in Russia. This means a real decline in overall investment in Russia far beyond just some Russian banks and oligarchs.

10.  India Is Mulling Rupee-Ruble Payments System for Trade with Russia

India is discussing how to set up a rupee-ruble payment mechanism to enable it to trade with Russia, to circumvent the U.S. sanctions regime.

India Is Mulling Rupee-Ruble Payments System for Trade with Russia

The modern West has abandoned the Faith, and lost, along with it, even the natural virtues, along with these supernatural gifts.  The higher one has been raised, the further he has to fall.

In his classic book Suicide of the West, James Burnham famously characterized liberalism as “the ideology of Western suicide.”  I’ve been meaning for some time to write up an essay on the book.  This isn’t it.  But Burnham’s thesis came to mind when reading Michael Anton’s essay “Unprecedented” in the latest New Criterion, because the phenomena Anton cites clearly confirm Burnham’s analysis.

Ours is a civilization in decline, and at a rapidly accelerating pace.  That isn’t new in human history.  But the precise manner in which it is disintegrating seems to be unprecedented, which is the reason for the title of Anton’s essay.  What has effectively become the ideology of the ruling classes, which goes by many names – political correctness, “wokeness,” “critical social justice,” the “successor Ideology,” the baizuo mentality, and so on – manifests a perverse self-destructiveness and nihilism that, as Anton argues, appears sui generis.

This ideology, now embraced wholeheartedly by our elites and propagated by them in all the major institutions of society, teaches hatred of their own country and their own civilization as somehow uniquely malign and oppressive.  It encourages foreigners and immigrants to regard the United States and the West in general with the same hostility.  Affluent left-wing whites have also adopted an ethnic self-hatred that is unparalleled in history, enthusiastically embracing the demonization of their “whiteness” as the source of all evil in the world.  Yet these forms of oikophobia or hatred of one’s own are prescribed by them only for Westerners and white people – non-Westerners and non-whites, however bloody or oppressive the histories of their own people, are encouraged only ever to celebrate their heritage.

To read the full article, copy the link, and paste it in your browser.

Zelensky to the Poles: “God willing and we win, we will share our victory with you.” President Zelensky’s speech in the Polish Parliament