1.  Is America Getting ‘Compellence’ wrong in Ukraine?

Are we unintentionally sacrificing Ukraine’s sovereignty for Russian guarantees that will become meaningless once NATO’s credibility is lost?

From November 1990 through January 1991, in preparation for the first Gulf War, the U.S. Army, Marine Corps, and Coalition Forces moved into assembly areas near the Iraqi border and trained for months while rehearsing and preparing a credible invasion force. The purpose for this very visible, months-long build-up was to compel Iraq’s leader, Saddam Hussein, to withdraw from Kuwait, preferably without military action but prepared to use force if need be. This is essentially what the Russian forces are doing now along Russia’s frontiers with Ukraine.

Compellence is the opposite of deterrence and is historically much trickier. American economist and arms control expert Thomas C. Schelling, who won the Nobel Prize for Economics in 2005, coined the word in his 1966 book Arms and Influence. Schelling described compellence as a direct action that persuades an opponent to give up something that is desired. He distinguished compellence from deterrence, which is designed to discourage an opponent from action by threatening punishment. Deterrence is designed to avoid taking costly actions, but compellence requires costly actions and implies escalation. 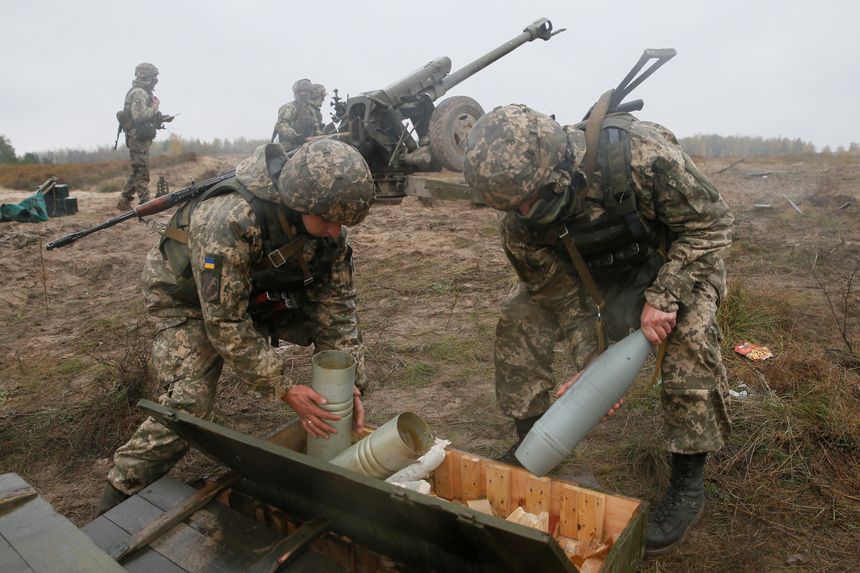 Germany is blocking North Atlantic Treaty Organization ally Estonia from giving military support to Ukraine by refusing to issue permits for German-origin weapons to be exported to Kyiv as it braces for a potential Russian invasion.

Unlike the U.S., Britain, Poland and other allies, the German government has declined to export lethal weapons directly to Ukraine.

In the case of Estonia, a small country on Russia’s northern border, Berlin is also refusing to allow a third country to send artillery to Ukraine because the weaponry originated in Germany, according to Estonian and German officials.

The issue is being seen by Western security specialists and Ukraine as a test of Berlin’s arms-transfer policy during a mounting crisis in Europe and points to the difficulties the U.S. and its European allies are facing in forging a common response to Russia’s military buildup near Ukraine and demands.

[…] “The principle governing arms exports is always the same—whether they come directly from Germany or from third countries—and no permission has been issued at this stage,” a German government spokesman said.

[…] While the Estonian weapons wouldn’t change the dynamics on the battlefield, Germany’s refusal could be read by Moscow as another sign of division in the West’s ranks.

4.  The Russia-China Axis of Authoritarianism: Part I

5.  Russia and Ukraine: War or Bluff?

Two weeks ago, I wrote an analysis of Russian strategy titled “Russia’s Move.” Here’s a brief recap: When the Soviet Union collapsed, it lost control of the western borderlands that had been the bedrock of its security for hundreds of years. Those borderlands created a strategic depth that forced invaders into an extended and exhausting campaign that Russia could resist. Russia had been attacked in the 18th century by the Swedes, in the 19th century by France, and twice in the 20th century by Germany. There had also been wars with Turkey in the 18th and 19th centuries. In 1991, these borderland regions became independent, and from the Russian point of view, the West generally and the United States specifically sought to control the newly formed states. This constituted nothing less than an existential threat to Russia.

A few days after “Russia’s Move,” I wrote a piece called “Intelligence and Love,” in which I argued that to defeat an enemy you must objectively understand how they see themselves. And for its part, Russia sees itself as vulnerable, particularly from the west, where the most dangerous threats have historically originated. Belarus and Ukraine are the heart of Russian fears. The Ukrainian border is only a few hundred miles from Moscow and is therefore a major threat when in the hands of enemies. Distance will not wear down an enemy attacking from there. From the Russian point of view, the unwillingness of the United States to recognize these deep-seated fears suggests the United States has aggressive and dangerous designs. The only imaginable value Belarus and Ukraine hold for the Americans is to put Russia in a position where it must capitulate to the United States on all critical matters – or risk an outright invasion. Where the United States has no overriding interests, Russia has existential ones.

Russia must therefore act. In Belarus, it already has. Last year, President Alexander Lukashenko won a dubious and heavily criticized election. The Russians intervened to save Lukashenko and are now in effective control of Belarus, thereby securing the North European Plain, the primary invasion route from Europe to Moscow. This leaves Ukraine, a much larger and more important state, in Russia’s crosshairs.

Russia and Ukraine: War or Bluff?

6.  Deputy Speaker of the Polish Sejm, Terlecki: “What is Putin up to?”; “He has set tough conditions in his negotiations with the West”

Russian President Vladimir Putin has set tough negotiating conditions on the West that are so hard as to be virtually unacceptable. These include the prohibition of Ukraine and Georgia from joining NATO and the withdrawal of NATO troops from the alliance’s eastern flank – assesses Ryszard Terlecki, Deputy Speaker of the Sejm.

In his column in “Dziennik Polski,” entitled “Everything is politics. Russia goes to war? ” the head of the PiS club answers the question of whether Russia will attack Ukraine in the coming days or weeks. This is something both politicians and military commanders in Europe and the United States are asking themselves.

As he points out, “The Americans predicted the beginning of a new phase of the conflict in mid-January. Now they have recognized a two-three-week delay due to the mild winter in the east: unfrozen ground will hinder the movement of tanks.”

“Ukraine is getting ready to repel the attack, and the latest information talks about groups of commandos transferred to the occupied areas of eastern Ukraine, who are to be used appropriately for provocation on a temporary border, and this would become a pretext for a Russian attack,” he adds.

What are the plans of the president of Russia?

What is Putin up to? To occupy all of Ukraine, or at least its eastern part to the Dnieper, with the necessary attack on Kyiv? It is unlikely, he assesses.

In his opinion, other variants are possible: the intention to directly attach to Russia the areas around Donetsk and Lugansk with some minor expansion at the expense of Ukraine; permanent deployment of troops in Belarus; bringing about a political turning point in Kyiv.

Or is it just a bluff? Putin set tough negotiating conditions for the West, so tough as to be virtually unacceptable. These include the prohibition of Ukraine and Georgia from joining NATO, as well as the withdrawal of NATO troops (primarily American) from the eastern flank of the alliance (probably including Poland),” writes the head of the PiS club.

“Perhaps Putin hopes that the weak administration in Washington will yield to this pressure and allow Russia to achieve another political success. And this is Western Europe (mainly Germany) that will be welcomed with delight, will hastily launch Nord Stream 2, and happily become even more dependent on Russian gas supplies. If Putin just wanted to scare the West, the classic war against Europe would not be the threat, but the policy pursued on its brink still carries a serious risk. And what is important to us: it will maintain the threatening tension at our eastern border.”

“Russia still has too few troops at the border with Ukraine. The losses during such an operation would have to be enormous. The international reaction is difficult to predict, which does not mean that Russia cannot implement such a crazy idea,” he says. Continuing, “The second possible option is a limited attack along the coast, on Mariupol, towards Crimea and the cut off of Ukraine from the Sea of ​​Azov, which the Russians now control,” continues Terlecki.

In Terlecki’s opinion, “Such a ‘small’ war would mean heavy fights with the Ukrainian army, one of the largest in Europe at the moment. A further march along the Black Sea shore towards Odessa would actually be the same as the first option. The benefits from territorial gains would not offset the scale of the sanctions that Russia would face, at least for some time.”

7.  Jordan Peterson: Why I am no longer a tenured professor at the University of  Toronto

The appalling ideology of diversity, inclusion and equity is demolishing education and business

First, my qualified and supremely trained heterosexual white male graduate students (and I’ve had many others, by the way) face a negligible chance of being offered university research positions, despite stellar scientific dossiers. This is partly because of Diversity, Inclusivity and Equity mandates (my preferred acronym: DIE). These have been imposed universally in academia, despite the fact that university hiring committees had already done everything reasonable for all the years of my career, and then some, to ensure that no qualified “minority” candidates were ever overlooked. My students are also partly unacceptable precisely because they are my students. I am academic persona non grata, because of my unacceptable philosophical positions. And this isn’t just some inconvenience. These facts rendered my job morally untenable. How can I accept prospective researchers and train them in good conscience knowing their employment prospects to be minimal?

Second reason: This is one of many issues of appalling ideology currently demolishing the universities and, downstream, the general culture. Not least because there simply is not enough qualified BIPOC people in the pipeline to meet diversity targets quickly enough (BIPOC: black, indigenous and people of colour, for those of you not in the knowing woke). This has been common knowledge among any remotely truthful academic who has served on a hiring committee for the last three decades. This means we’re out to produce a generation of researchers utterly unqualified for the job. And we’ve seen what that means already in the horrible grievance studies “disciplines.” That, combined with the death of objective testing, has compromised the universities so badly that it can hardly be overstated. And what happens in the universities eventually colours everything. As we have discovered.

Although we encourage all citizens to receive the COVID-19 vaccination, it is not compulsory or mandatory. Vaccination will be given only with the consent of the person to be vaccinated after the information provided. Please get vaccinated of your own decision, understanding both the effectiveness in preventing infectious diseases and the risk of side effects. No vaccination will be given without consent. Please do not force anyone in your workplace or those who around you to be vaccinated, and do not discriminate against those who have not been vaccinated.

The Czech Republic’s new government on Wednesday dismissed the previous government’s plan to require older adults and people in some professions to get vaccinated against the coronavirus.

It was due to take effect in March. But Babis’ administration was replaced later in December by a new government formed by five parties and led by Prime Minister Petr Fiala.

“We’ve agreed that vaccination against COVID-19 won’t be mandatory,” Fiala said, stressing that his government still considers the vaccines “the best tool to fight COVID-19.”

Opponents of a vaccine mandate had staged several protests in Prague and elsewhere in the country.