1.  Germany’s Baerbock says Russia troop buildup ‘hard not to take as a threat’ 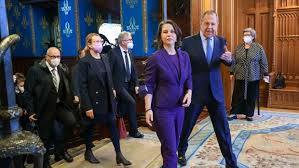 Baerbock’s first official trip to Russia comes just a day after talks in Kyiv about the crisis.

What did the ministers say about Ukraine?

At a joint press conference, Baerbock said that the Russian troops’ buildup near Ukraine had “no understandable reason” and it was “hard not to take as threat.””There will be no security in our joint European home if there are no rules everyone can rely on,” said the Germany foreign minister.

Lavrov seemed to strike a conciliatory tone at the Tuesday press conference, saying that the talks showed there was a possibility of slowly moving in a positive direction. He also decried the damage done by anti-Russian sentiment in Brussels and “the group of anti-Russian countries in the EU.”

As expected, Baerbock called for “bringing new life” to the talks in the so-called Normandy format, which includes Ukraine, Germany, Russia and France. Her Russian colleague, however, said that German officials should pressure their partners in Kyiv to have Ukraine “finally fulfill the obligations they had taken on” in previous rounds of the now-stalled talks. Such obligations include implementing a special status for parts of the pro-Russia Donbass region and opening the door to local elections in the area.

What about Nord Stream 2?

-Lavrov urged a resolution to the standoff surrounding the Nord Stream 2 pipeline, which is still under inquiry by a German regulatory body.

– In turn, Baerbock said Berlin needs a “reliable Russia” in order to “supply Europe with gas in the coming years.”

What did Baerbock say in Kyiv?

– Germany would “do our all to guarantee Ukraine’s security.”

-She also said any attack on Ukraine would come with a high price for the aggressor.

-“There is no alternative to stable ties between Moscow and Berlin,”

Here is how DW correspondent Aaron Tilton summed up the meeting:

“I think this was more a cordial, polite visit among neighbours than really one where Moscow was hoping to hammer out some kind of permanent deal regarding NATO and the Ukraine, because really at the end of the day they think that Joe Biden, the man in the White House, is really the person they should be talking to when it comes to NATO and NATO’s expansion eastwards.”

2.  What Putin Really Wants in Ukraine

As 2021 came to a close, Russia presented the United States with a list of demands that it said were necessary to stave off the possibility of a large-scale military conflict in Ukraine. In a draft treaty delivered to a U.S. diplomat in Moscow, the Russian government asked for a formal halt to NATO’s eastern enlargement, a permanent freeze on further expansion of the alliance’s military infrastructure (such as bases and weapons systems) in the former Soviet territory, an end to Western military assistance to Ukraine, and a ban on intermediate-range missiles in Europe. The message was unmistakable: if these threats cannot be addressed diplomatically, the Kremlin will have to resort to military action.

These concerns were familiar to Western policymakers, who for years have responded by arguing that Moscow does not have a veto over NATO’s decisions and that it has no grounds to demand that the West stop sending weapons to Ukraine. Until recently, Moscow grudgingly acceded to those terms. Now, however, it appears determined to follow through with countermeasures if it doesn’t get its way. That determination was reflected in how it presented the proposed treaty with the United States and a separate agreement with NATO. The tone of both missives was sharp. The West was given just a month to respond, which circumvented the possibility of prolonged and inconclusive talks. And both drafts were published almost immediately after their delivery, a move that was intended to prevent Washington from leaking and spinning the proposal.

If Russian President Vladimir Putin is acting as if he has the upper hand in this standoff, that’s because he does. According to U.S. intelligence services, Russia has nearly 100,000 troops and a great deal of heavy weaponry stationed on the Ukrainian border. The United States and other NATO countries have condemned Russia’s moves but simultaneously suggested that they will not defend Ukraine, which is not a NATO member, and have limited their threats of retaliation to sanctions.

Defense Secretary Ben Wallace said the move comes as tens of thousands of Russian troops are positioned next to the Ukrainian border, adding that he does want to give “false hope” the UK will send in armed forces if war does break out.

Britain will provide Ukraine with “light armour defensive” weapons and training as Western powers fear an “increasingly threatening” Russia will invade the country.

Defence Secretary Ben Wallace said the weapons being supplied are “short range” and to use in “self-defence”, adding that they are not “strategic” and “pose no threat to Russia”

4.  An article by the Defense Secretary on the situation in Ukraine

I have lost count of how many times recently I have to had to explain the meaning of the English term “straw man” to my European allies. That is because the best living, breathing “straw man” at the moment is the Kremlin’s claim to be under threat from NATO. In recent weeks the Russian Defence Minister’s comment that the US is “preparing a provocation with chemical components in eastern Ukraine” has made that “straw man” even bigger.

It is obviously the Kremlin’s desire that we all engage with this bogus allegation, instead of challenging the real agenda of the President of the Russian Federation. An examination of the facts rapidly puts a match to the allegations against NATO.

First, NATO is, to its core, defensive in nature. At the heart of the organisation is Article 5 that obliges all members to come to the aid of a fellow member if it is under attack. No ifs and no buts. Mutual self-defence is NATO’s cornerstone. This obligation protects us all. Allies from as far apart as Turkey and Norway; or as close as Latvia and Poland all benefit from the pact and are obliged to respond. It is a truly defensive alliance.

How ambitious are Russia’s foreign policy objectives, and how much force does Moscow believe it must employ to achieve them? Moscow has submitted various ultimatums, but the most critical and pressing issue is that the Kremlin now regards Ukraine as a permanently hostile country continuing to increase its defense capabilities. Russian hopes for improved relations with President Volodymyr Zelensky were dashed in 2021, and Moscow is now focused on reducing the long-term security risk posed by Ukraine, including halting its expanding defense cooperation with NATO. However, this is one of the most unrealistic and difficult demands for NATO to satisfy, particularly because Ukraine is developing long-range missiles domestically. This diplomatic impasse suggests a significant risk of a Russian military escalation in Ukraine with few obvious offramps.

6.  Time for NATO to Close Its Door

The NATO alliance is ill suited to twenty-first-century Europe. This is not because Russian President Vladimir Putin says it is or because Putin is trying to use the threat of a wider war in Ukraine to force neutrality on that country and to halt the alliance’s expansion. Rather, it is because NATO suffers from a severe design flaw: extending deep into the cauldron of eastern European geopolitics, it is too large, too poorly defined, and too provocative for its own good.

Established in 1949 to protect Western Europe, NATO was a triumph at first. It held an advancing Soviet Union at bay, kept the peace, and enabled the economic and political integration of Western Europe. After the end of the Cold War, the United States and various countries in central and southeastern Europe encouraged a dramatic enlargement of the alliance, opening NATO’s doors to more than a dozen nations in successive rounds of expansion. Today, the alliance is a loose and baggy monster of 30 countries, encompassing North America, western Europe, the Baltic states, and Turkey. This expanded NATO wavers between offense and defense, having been involved militarily in Serbia, Afghanistan, and Libya. The sheer enormity of the alliance and the murkiness of its mission risk embroiling NATO in a major European war.

To simplify its strategic purpose and to improve its defensive capacities, NATO should publicly and explicitly forswear adding any more members. The alliance should make clear that its long phase of expansion is over. Ending the open-door policy, tricky as it would be to execute, and rethinking the security architecture of central and eastern Europe would not be a concession to Putin. To the contrary, it is necessary in order for the most successful alliance of the twentieth century to endure and prosper in the twenty-first.

[…] –  “But you can think about the metaverse as an embodied internet, where instead of just viewing content  you are in it. And you feel present with other people as if you were in other places, having different experiences that you couldn’t necessarily do on a 2D app or webpage, like dancing, for example, or different types of fitness.”

–  Despite the capability of technology to do much that fans of the metaverse say will be possible, Libin said he expects a fundamental disconnect between human nature and virtual reality headsets.

– “VR is the thing that guarantees none of this will ever take off, because no one wants to spend any amount of time with a plastic thing strapped to their face,” he said.

The government thinks all communication should be available for snooping

The UK is stepping up its “war on encryption,” reports are saying, and like in any good old war, propaganda comes first to “prepare the ground.” And a new campaign is expected to launch as early as this month.

In this case, they call it publicity, with the Home Office being behind the effort whose goal is to sway public opinion in favor of undermining the privacy of the very members of that public – using their own money from public funds, to the tune of over half a million pounds.

Meanwhile the “hired gun” is ad agency M&C Saatchi. The Rolling Stone said it had a chance to review documents thanks to a Freedom of Information request, and that what it discovered were “some shockingly manipulative tactics.”

Professor Ehud Qimron, head of the Department of Microbiology and Immunology at Tel Aviv University and one of the leading Israeli immunologists, has written an open letter sharply criticizing the Israeli – and indeed global – management of the coronavirus pandemic.