Later Saturday, a White House official attempted to clarify that Biden “was not discussing Putin’s power in Russia, or regime change,” but rather was making the point that Putin “cannot be allowed to exercise power over his neighbors or the region.”

NATO leaders made clear in a statement that they are taking measures to ensure their nations’ security and defense on land, in the air, and at sea amid the ongoing Russian invasion of Ukraine.

The NATO member states warned Moscow that they were increasing the resilience of their societies and infrastructure to counter Russian cyber-attacks and other threats.

[…] A senior U.S. security official said some 10,000 American military personnel are also in Ukraine, though the White House insists no U.S. combat troops are on Ukrainian territory.

Russia on Wednesday condemned what it called a “reckless” Polish proposal to send international peacekeepers into Ukraine and warned that it could lead to a direct clash between Russian and NATO forces.

Putin’s Press Secretary Dmitry Peskov joined CNN’s Christiane Amanour on Tuesday. During their discussion, Peskov said Russia will use its nuclear weapons if faced with an “existential threat.”

Christiane Amanpour: Is President Putin, because again the Finnish President said to me that when he asked Putin directly directly about this, President Putin laid that card on the table, President Putin said if anyone tried to stop him “very bad things will happen.” And I want to know whether you are convinced or confident that your boss will not use that option?

Joe Biden spoke to troops with the 82nd Airborne in Poland Friday, telling them what to expect to see when they go to Ukraine. Biden also appears to have let slip that some troops have already been in Ukraine. The White House later clarified there has been no change in U.S. policy about not sending troops to Ukraine.
https://www.thegatewaypundit.com/2022/03/biden-tells-us-troops-poland-going-ukraine-video/

Facing financial sanctions and economic pressures from the U.S, NATO, EU and western allies, Putin stated today that all oil and gas payments must be made in Russian rubles.

The EU has few options as they are reliant upon Russia for energy products oil and gas.  If Putin organizes payment in rubles, his currency will automatically increase.  This sets the stage for other less hostile countries like the BRICS alliance to assist Putin ideologically and financially by transacting in rubles through the Russian central bank.

(Oil and Gas) – […] Russian President Vladimir Putin said on Wednesday that Russia would start charging the countries it considers “hostile” in rubles for its natural gas.

Together with Slovenia and the Czech Republic, we have prepared a list of actions the EU must enforce if it really wants to end the war.

First, we must cut off all Russian banks from the SWIFT international payment system. Otherwise, the Russian economy will adapt to the new conditions within a few weeks.

Second, we must put in place a common asylum policy for Russian soldiers who refuse to serve the criminal regime in Moscow.

Third, we must completely stop Russian propaganda in Europe. Freedom of speech does not mean the right to lie.

8.  Opinion : Russia Has Declared War on the West. Here’s How to Win. 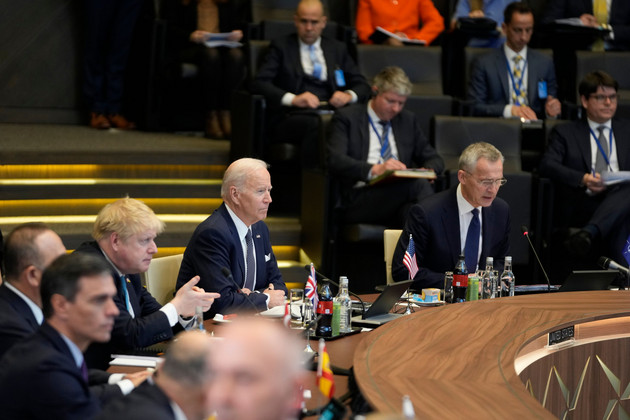 The greatest security crisis of our time requires us to think big to succeed. The United States can lead this effort and help the world to restore peace and the integrity of our institutions.

Here is a plan for victory:

First, Ukraine should be provided with all the weapons it needs to fight back against the Russian aggressor. President Vladimir Putin seeks no compromises. He attacked Ukraine, driven by his desire to resurrect the Russian empire. What he demands from Ukraine is its unconditional surrender, and even if he is now unable to achieve this end, he will not simply concede. He will continue to sow death and destruction to weaken Ukrainian morale. The only way the international community can influence his calculus is to arm Ukraine to the teeth, rendering his goals unachievable.

9.  Opinion: John Mearsheimer on why the West is principally responsible for the Ukrainian crisis

The war in Ukraine is the most dangerous international conflict since the 1962 Cuban missile crisis. Understanding its root causes is essential if we are to prevent it from getting worse and, instead, to find a way to bring it to a close.
There is no question that Vladimir Putin started the war and is responsible for how it is being waged. But why he did so is another matter. The mainstream view in the West is that he is an irrational, out-of-touch aggressor bent on creating a greater Russia in the mould of the former Soviet Union. Thus, he alone bears full responsibility for the Ukraine crisis.
Second, the United States’ allies throughout the world must increase their investments in deterrence and defense.

Cash-strapped Central European states Poland and Hungary have asked the EU Commission to intervene on their behalf in order to receive nearly $45 billion in assistance currently being withheld because the two states do not hold liberal views on homosexuality and transgenderism.

This is happening even though Poland and Hungary are bearing the brunt of the first impact of Ukrainian refugees. Over 2 million Ukrainian refugees entered Poland since Russia invaded the Ukraine. Nearly half a million have fled to Hungary.

Pope Francis on Russia and Ukraine