The Polish American Congress requests an acknowledgement of the following historical event in the California Model Curriculum for Ethnic Studies.

The document filed with California Department of Education:

Request for inclusion: Acknowledgment with Lesson Plan, Strike of Polish craftsmen at Jamestown, 1619.

The California Ethnic Studies curriculum began with the campus strike for equity at San Francisco State College in 1968. The Model Curriculum for Ethnic Studies currently in development should not fail to note the first strike for equity in the New World, at Jamestown in 1619, when Polish craftsmen in the English colony laid down their tools to demand a right to vote in the newly forming House of Burgesses, and won their claim, in a model settlement that remains a beacon for current developments, intersecting with aspirations of diverse California and national communities.

The Polish American Congress requests acknowledgment of this instructive historical event, and inclusion of a lesson plan in the Model Curriculum for Ethnic Studies.

Here is a lesson plan that was prepared by the Center for Politics at the University of Virginia, concerning the strike for equity, the first in the New World, by Polish craftsmen in the English colony at Jamestown in 1619:

Here are proclamations celebrating the action of the Polish craftsmen at Jamestown 1619, issued by the Governors of Michigan and Virginia:

The major Polish artist Artur Szyk contributed a well-researched painting for the Polish Pavilion at the 1939 New York World’s Fair, depicting the known Polish craftsmen in the Jamestown colony, some of whom arrived with Captain John Smith in 1608. The artist modeled the faces from contemporary Poles having the family names of the Jamestown settlers. Students today might consider the thoughts expressed in those faces. 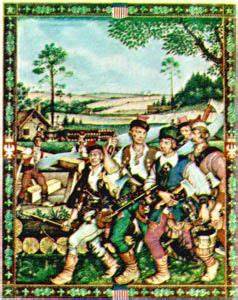 Please call upon me for any further assistance toward including this deep dimension in the development of Ethnic Studies and relations in our New World.

Prof. Jablonski: If Germany sets a negative example on vaccines, it is difficult to expect European unity in the future.

Message by the President of the Republic of Poland

The Spectator: The EU will regret the legal attack on Poland

Invest in the freedom of Poles!